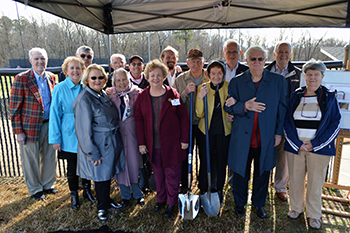 Brown joined Council President Paul Wilson and members of the committee as they symbolically began construction on the new brick and aluminum gate for the baseball team’s Frazier Field. The gate will help honor the past success of the team and its former, legendary Coach Russell Frazier, while also helping visitors safely locate the field’s entrance.

“It’s a milestone in the history of our school, and I hope it will increase the reputation of our baseball program,” Wilson said. “Baseball is alive and well at Louisburg College.”

GAC members raised the money to cover the cost of the project.

Current head coach Blake Herring was on hand with former coach Frazier as the council celebrated the achievement.

“I’m very thankful and appreciative to the members of the Golden Anniversary Council for making this happen,” Frazier said. 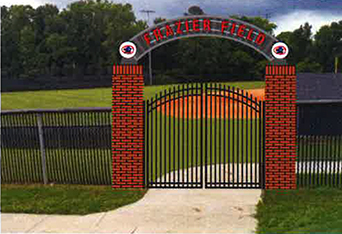 Louisburg College’s baseball team has been to the World Series 10 times since Frazier started the program toward its tradition of excellence in 1959. Frazier retired in 1999, and the team last attended a World Series in 2002. Louisburg College baseball experienced a slight downturn, but it’s currently on a winning trajectory under Herring’s administration, with a 31-22 record last season.

“The players, coaches and alumni have created the standard of excellence, and it is the NJCAA Division I Baseball World Series in Grand Junction, Colorado. So unless we get there, it doesn’t matter how many games we win,” Herring said. “The ultimate strength of this team is they don’t think they’re going to lose. They’re never out of the game mentally.”

The team is working hard so the local community, alumni and supporters have reasons to remain engaged and enthusiastic about baseball and become more involved with the team.

“There isn’t a better show on Saturdays and Sundays, in the Town of Louisburg and throughout Franklin County, than what’s happening at Frazier field,” Herring said.