Most people run errands at Target the weekend before starting a new job, but Louisburg College’s new Cross-Country and Track Coach decided to run the Boston Marathon. 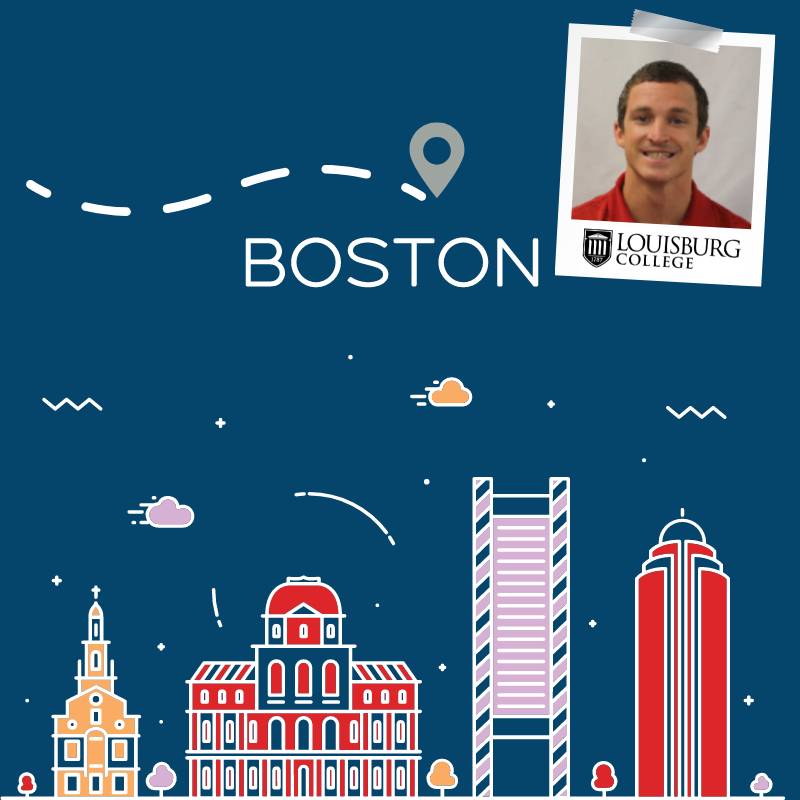 Coach Chandler Caldwell, a sport management graduate from NC State, recently joined the ranks of Louisburg College’s athletics staff. Moving back to his hometown of Gastonia, NC after college, Caldwell rekindled his passion for running and competing in the occasional race in 2016. He also started coaching at his Alma Mater, Forestview High School, and found a passion for coaching just as he was finding his own stride as a runner, crediting his athletes as inspiration.

Caldwell is no stranger to Louisburg College. He signed two of his high school athletes to Louisburg, and he was a volunteer coach for the college in the 2019-2020 academic year until his coaching was cut short by COVID restrictions. Caldwell coached at Athens Drive High School and provided private training until he secured the head coach position at Louisburg this fall. Then, Caldwell made his way to Boston.

The Boston Marathon is Caldwell’s fourth marathon; qualifying for the race when he ran 2:51:33 HIat Kiawah Island, SC in December of 2019. The desire to run Boston came after seeing his best friend run in 2015. Caldwell’s return to running was arduous, but six years later, he was at that starting line. When asked about how the race went, Caldwell simply said, “good, not great.” Caldwell fell short of his under three hours goal by just 19 seconds, though most would balk at the idea of maintaining a 6:53 per mile pace. Caldwell said,

“Being that close to ‘sub 3’ is tough, but you know this was my first time running Boston. I really just wanted to hang back and soak it all in. High fiving all of the little kids that lined the course and pumping up the crowd in certain areas. All in all, it was an unbelievable experience. Having my Dad and several friends there to support me meant the world.  I can't wait to get back.”

Caldwell’s love for running was evident in his interview, stating, “Running a marathon is both miserable and beautiful at the same time. The pain always ends up being worth it once you cross the line. I love it! It tests your limits for sure.” Caldwell is excited to bring that love of the race to Louisburg College. When asked about his mission as a coach at Louisburg, Caldwell stated, “I am hoping to bring in dedicated student-athletes with the right mindsets. Athletes who are eager to get to work and improve their times. Who don't mind tough workouts. But most importantly, I want to bring in great people that Louisburg College can be proud of. I want to train them up and help them find the best possible fit for their next school after Louisburg as well.”